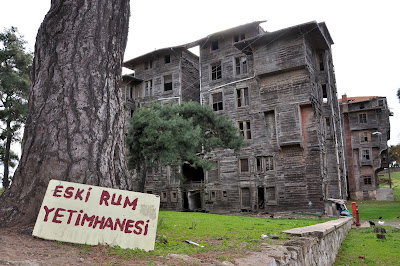 Greek orphanage to serve as foundation for environment

The Büyükada Greek Orphanage of the İstanbul-based Fener Greek Orthodox Patriarchate is to become an international environmental foundation.
A ruling by the European Court of Human Rights (ECtHR) in June 2010 stated that the Turkish government should re-register the historic Orthodox orphanage on Büyükada to the İstanbul-based Fener Greek Orthodox Patriarchate. Following the ECtHR ruling, the orphanage will probably be turned into a global environmental center, according to comments made by Patriarch Bartholomew I, who has been nicknamed the “green patriarch,” to the prime minister of Turkey.
Official procedures have been continuing to make the historic building an environmental center, but the progress has been slow. The orphanage has been exposed to harsh weather conditions.

“It has taken us so long because we have been working very seriously on this project. We have completed our analyses. The foundation will not serve as a religious institution but a civil society organization which works internationally,” said Laki Vingas, representative of non-Muslim foundations at the Prime Ministry's Directorate General for Foundations (VGM).

The foundation's name will be the Prinkipos Environmental Foundation; Prinkipos means “prince” in Greek. Büyükada, which means "Big Island" in Turkish, is the largest of the nine islands comprising the Princes' Islands in the Sea of Marmara, close to İstanbul.

After the foundation was registered with the Fener Greek Orthodox Patriarchate in board of directors was established comprising Bartholomew, who is based in İstanbul, Vingas, two prominent businessmen and two metropolitans of the patriarchate.

Restoration of the building is expected to be completed in two years, and in the meantime, funding will be sought to support the foundation, which will act independently of the patriarchate. The environmental foundation is expected to serve all academics working on environmental issues. Regular symposia will be held to establish dialogue between religions on the issue of the environment.
The orphanage, one of the largest wooden buildings in the world, was bought by the patriarchate in 1902 and its management was handed over to the Büyükada Greek Orphanage Foundation in 1903. The title deed of the orphanage has been under the control of the VGM since 1997 and was registered as a property of the Büyükada Greek Orphanage Foundation by the directorate through a court order dated 2004.